The following are excerpts of remarks by Bhanu Dhamija, author Why India Needs the Presidential System at the launch of Jashwant Mehta’s new book, Presidential Democracy: India’s Dire Need for Better Governance, on April 11, 2019 at the Indian Chamber of Commerce Hall, Mumbai.

I am honored to be invited to speak at the launch of Mehtaji’s book, Presidential Democracy.  This topic is of immense importance for the future of our nation.  We all know that our country’s current system of government is broken.  So I appreciate every effort toward changing this rotten system.

As someone who has also devoted more than a decade to this mission, I can tell you that this cause is not for the fainthearted.  Nor for a man in a hurry.  Changing the country’s system of government through a democratic process can take centuries.

WHY DOES IT TAKE SO LONG?

Because those who have the power to change the system, do not want the system to be changed.  They spent their entire life figuring out how to game the existing system.  And now that they have finally reached the positions of power, they have no interest in bringing themselves down.

There are occasional visionaries.  Leaders who see beyond their selfish interests.  Leaders who can see that the existing system is not going to make our country a great nation.  There have been such visionaries in India’s history.  Big leaders who have thought that India should adopt some variation of the presidential form of government, or at least not adopt the British style parliamentary system.   Gandhiji, Vallabhbhai Patel, BR Ambedkar, Jinnah, KM Munshi, Tej Bahadur Sapru, R. Venkatarman, who would become President.  Since our Independence, we have: BK Nehru, JRD Tata,  Constitutional Scholar Nani Palkhivala, Vasant Sathe, Inder Kumar Gujral.  And in recent times: Arun Shourie, Khushwant Singh, Kuldip Nayar, Babulal Marandi, Shanta Kumarji, former Himachal CM and Cabinet Minister, Vajapayeeji, Advaniji, Shashi Tharoor, Rajiv Pratap Rudy. All these leaders preferred some form of the presidential system.

VAJPAYEE’S INTEREST IN THE PRESIDENTIAL SYSTEM 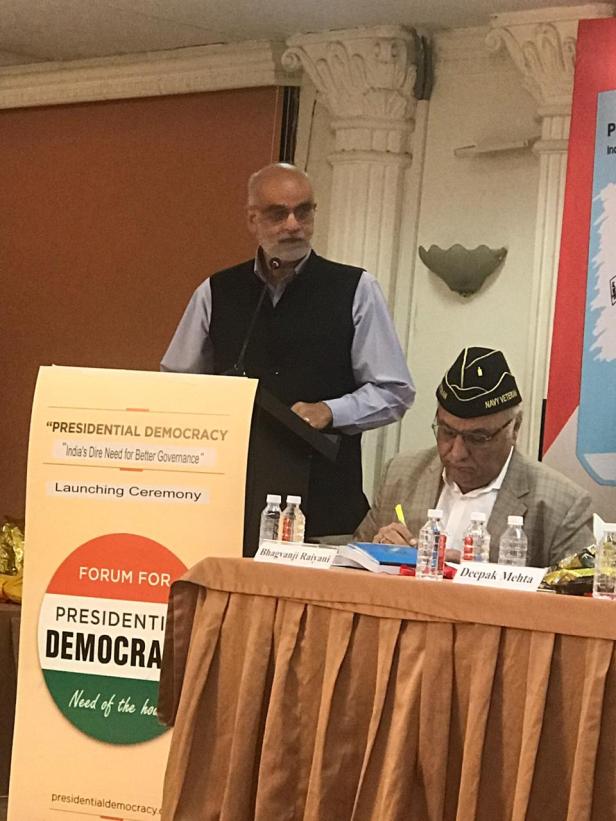 Inside the BJP, I have it from a direct source, that a decision was made to seriously consider switching the country system.  The Vajpayee government went ahead and appointed a commission under the chairmanship of Justice Venkatachalliah ji.

WAS THE BJP SERIOUS?

Could it really adopt the presidential form of government?  Is there a possibility that it could still happen?

Well, we all see how Modiji is running a presidential-style campaign.  He loves the concept of a single leader running the show, and a single election for the whole country.  It seems from HIS conception of the presidential model, he would be inclined to adopt that system.

But would the RSS go along?

I have attempted to understand the thinking of Deen Dayal Upadhyayji, the Sangh’s and the BJP’s main ideologue. Upadhyayji was critical of our Constitution all his life.  He presented his plans to change the system in 1965 under his philosophy, Integral Humanism. His thoughts about a new India, a dharma rajya, were adopted by the BJP as its official philosophy.  To this day, the party wishes to rebuild India according to Upadhyayaji’s vision.

Some BJP and RSS thinkers are already working to draft a new Constitution. In 2016, Govindacharya ji, RSS ideologue and powerful general secretary of the BJP at one point, declared in an interview: “We will rewrite the Constitution to reflect Bhartiyata.”  In 2017, BJP Union Minister Anant Kumar Hegde also said,  “We are here to change the Constitution and we’ll soon change it.”

So what kind of a system did Upadhyayji  have in mind?

He said “Dharma Rajya doesn’t mean a theocratic state, where a particular sect and its prophet or guru rule supreme. All the rights are enjoyed by the followers of this particular sect. Others either cannot live in that country or at best enjoy a slave-like, secondary citizen’s status.”

If we put aside silly arguments over semantics, of what Dharma means or Hindutva or Bhartiyata means, Upadhyajaji’s basic idea that India should not be a theocratic state and have equality of people of all sects, matches more with the presidential system than the parliamentary system. Because in the parliamentary system, as we know, the majority-rules. In a Hindu majority nation, this means a sectarian government.  Which Upadhyayji, I am sure, will not approve of, and didn’t.

To him Dharama meant Innate Law, which is universal. And nothing is more universal than true secularism. Where government doesn’t engage in establishing or appeasing or hurting any religion.

Upadhayayji’s second governance principle was that individual alone should not be the basis of the Constitution.  He wished the community to have a greater say in governance. Once again, this principle matches more with the presidential form of government than the parliamentary.  The presidential system is decentralized, so communities can be more engaged in self-governance.  For example, in America there are 90,000 local self-government bodies, from school districts, to ambulance services, to public utilities, all managed by local communities themselves.

Third, Upadhyayji was against the existing Constitution because it threatened India’s Integrity. “According to the first paragraph of the Constitution,” he wrote, ‘India, that is Bharat, will be a federation of States’, that is, Bihar mata, Bangla mata, Punjab mata, Kannada mata, Tamil mata, all put together make Bharat mata. This is ridiculous, he said. “We have thought of the provinces as limbs of Bharat mata, and not as individual mothers. Therefore our Constitution should be unitary instead of federal.”

Upadhyayaji’s notion of an indivisible union of diverse states also matches more with the presidential form of government.  The US model is called federal, but it creates a more indivisible union than the parliamentary system.  Because it has no provisions that can allow states to supersede the national Constitution.  Today, our Parliament can grant dangerously secessionary powers to our state governments. Which, as we know, it has in the case of Kashmir and Assam or Nagaland and so on. Under a US type Constitution this will not be possible.  The legislature will have no powers to go beyond the boundaries of the national Constitution. It was the ironclad union of the American Constitution that saved that nation from falling apart, even during their Civil War.

Thus for all three basic principles suggested by Updhyayji: Universal Law, Indivisible Union, and Community Self-Rule, the presidential system would be the better choice.  So I am very hopeful that the BJP stalwarts would once again think seriously about adopting this system. 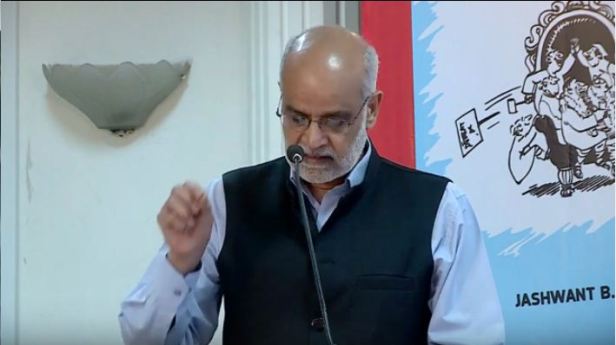 All this talk about constitutional principles is of no use to the common man.  He merely wants to know how the presidential system would help him and his children.  Now, Mehtaji has done a great job in giving us a summary of that system’s benefits.  But please allow me a brief moment to point out five main benefits from a common man’s point of view:

First, a common man needs the presidential system because that system cannot be controlled by a single person. It will save the common man from single-person decisions such as Indiraji’s Emergency, or Modiji’s Demonetization.

There are many people who still think, absolutely incorrectly, that the presidential system is one man rule. The truth is the opposite. In 230 years of US history no President has ever been able to act autocratically, but in just 70 years of our history we can think of at least two Prime Ministers who have been terribly autocratic.

Second, an aam aadmi needs the presidential system because it will save him from India’s corruption. That system divides powers between the executive and legislative, so that they can check each other. Our current system fuses them in one official. Checking him becomes meaningless.

Third, a common man needs the presidential system because that system will protect him from India’s vote-bank politics. In that system, candidates are chosen by primary elections, not by party bosses on the basis of caste or religion. These candidates have to win large direct elections, such as the entire state or the entire country, which cannot be won on the basis of vote banks politics.

Four, a common man needs the presidential system because it will stop governments from wasting taxpayer money.  In that system, governments have limited powers.  They cannot announce schemes beyond those powers and without scrutiny of their sources of funds.

Five, a common man needs the presidential system because it produces better leaders. Once again, because candidates are not chosen by party bosses behind closed doors, they have to actually win elections on their own capabilities.

HOW CAN INDIA ADOPT THIS SYSTEM?

Mehtaji asked me to focus more on this topic. So let me try to outline how this system can be adopted.  If we truly want to, adopting this system is not so difficult.

Second, a national political party could make changing India’s system, a part of its platform.  The BJP apparently did that once. It could happen again. In this context, let me point out that the common man has already decided that our current Constitution is a failure.  We ran an online survey when I was researching my book in 2014, and two-thirds of the respondents said Yes, our Constitution has failed.  Recently, a PR firm based in Chandigarh asked people if the current system had failed, and nearly 80% said yes. If a party adopts changing the system in its manifesto, I think it will be pleasantly surprised with people’s support.

Third, a nationally recognized leader could rally the people in asking for a systemic change. In this regard, I have hope from the likes of Shashi Tharoor and Rajiv Pratap Rudy.  Tharoor in particular has a tremendous following and has bravely spoken often in favor of adopting the presidential system. There is a recent hopeful sign that what I am suggesting can bring results. Congress party’s manifesto in this election includes Tharoor’s bill that he introduced in Parliament last year for changing India’s city governments along the lines of the presidential model.

So, if we all work jointly, and simultaneously, on all these three fronts: 1) Nudging the Prime Minister, 2) Urging leading national political parties, and 3) Supporting leading national leaders who can pick up this cause, this mission can be accomplished in our lifetime.

All this requires is “we the people,” to take the time and do something for the future of our children.

Ladies and gentlemen, I have no doubt that you are that “we the people”.  And you will do what you can to help build a great nation.  For we all know, we are not building a great nation with our current system of government.  We are a great people, but we are languishing.  And this hurts, not just us, but our children’s future.

So, my dear fellow Indians, let’s do something for our country.

What is the Presidential System?

Does America Need More Majoritarianism? Should U.S. Supreme Court Justices Have Term Limits? Presidential System Will Provide India a More Robust Democracy Prime Minister Modi is No ‘President’ What Would Gandhi Think of Our Constitution? Presidential System Could be More Suitable for India Why Ambedkar Didn’t Like India’s Constitution Could the BJP adopt the Presidential System? Indian Exceptionalism : A New Creed for a Greater Bharat Why BJP’s Idea of a Constitution Based on ‘Dharma Rajya’ is Flawed Ambedkar’s ‘United States of India’ How to be Vishwa Guru Reimagining Hindutva View All Posts...