Almost all political parties in India today are run as personal fiefdoms by one or two people at the top. This is not limited to political dynasties; even recently constituted parties like the Aam Aadmi Party or even those that grew from the ground like the BJP have adopted the ‘one-man show’ culture.

Political parties play an integral part in the functioning of India’s Constitution. But how can our democracy survive with such autocratic keepers? It is time India’s parties began practicing what they preach, and implement real internal democracy.

No Democracy Within Parties

It is astonishing that India’s Constitution requires the use of political parties to operate, but does nothing to regulate them. It was only after a prolonged phase of unstable governments due to cross-party defections of MPs and MLAs that party-based regulations were added to the Constitution. Among more than 50 references to “party” in today’s Constitution, almost all occur in anti-defection provisions.

What’s hurting India’s democracy the most, however, is that the Constitution doesn’t include any rules for political parties themselves. The Election Commission (EC) is a constitutional body, but its mandate is to hold elections, not regulate parties.

As a result, Indian parties don’t abide by their own constitution. Their leaders appoint themselves. They don’t hold organisational elections. Their candidates are selected through an entirely undemocratic process. And, since the passage of the anti-defection laws, they treat their party MPs and MLAs as stooges, not as people’s representatives. 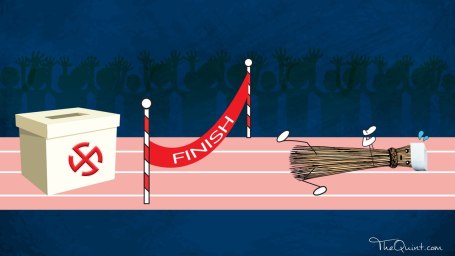 Even the new entrant in the political arena, the Aam Aadmi Party, fails to impress on the front of internal democracy.

Party supremos routinely “elect” themselves to the top post, or don’t even bother to hold these sham elections at all. According to EC records, AIADMK claimed in 2014 that Jayalalithaa was elected unopposed because “no one except her filed the nomination papers”.

The same year, Lalu Prasad proclaimed himself the President of RJD and personally “reconstituted national office-bearers, the National Executive, the Central Parliamentary Board and Core Group of the party”.

The Shiv Sena declared in 2013 that all party officials were elected unopposed “as the number of forms that were received equalled the number of posts”.

BSP submitted only a list of office-bearers without troubling itself with EC’s requirements of providing details of internal elections. And while the Trinamool Congress reported in 2011 that Mamata Banerjee was “elected” Chairperson, it stated flatly that all other party officials were appointed.

Even India’s two largest parties, the BJP and the Congress, have an autocratic approach toward organisational elections.

BJP’s internal election report in April stated that after the election of a new National President, “new office-bearers are nominated”. And Congress hasn’t even taken the trouble of holding internal “elections” since 2010.

The EC issued an ultimatum, but with no effect.

This has been going on almost since 1950. In 1993, AG Noorani, famed constitutional scholar, reported that Congress Party elections haven’t been held since 1972.

Political parties make strong demands for the conduct of free and fair elections to legislative bodies, but choose to ignore the application of the same principles when it comes to the functioning of their own party.

He suggested new legislation making it obligatory for parties to hold transparent elections.

What puts India’s democracy in even greater peril, however, is our political parties’ practice of not electing candidates for general elections. Instead of people choosing their own candidates, party bosses pick them. Even the most promising new party, AAP, has succumbed to this practice.

“This obscenity is unique to India,” wrote Noorani in 2005. “Few care to reflect on its baleful impact on the working of India’s Constitution and on the parliamentary system it establishes. The practice perverts both,” he said.

The candidates so selected are proven dealmakers, but are hardly the type of leaders India needs. This is one of the biggest reasons why our country has a dearth of visionaries. Mostly we have lifetime politicians, party operatives and sycophants.

Or worse, we have those who rose through the ranks only due to their caste or religion. And since these candidates owe their seats to their party bosses, they are more loyal to their masters than their constituents.

India’s anti-defection laws have made this “rotten” system – ironically so labelled by Rahul Gandhi, himself a party boss – even more autocratic.

Now it is illegal for MPs and MLAs to go against their party’s diktat. They can no longer vote with their conscience, and this subverts the very purpose of having people’s representatives.

So the deliberative process in our legislatures has been reduced to a farce. And it has turned our country into a political oligarchy run by a handful of party bosses.

Alleviating these major threats to our democracy requires action on three fronts:

Firstly, we must decentralise electioneering, make holding elections a state issue. After all, our people’s representatives come from the states. India doesn’t select any official from across the nation, so why should the Election Commission be a federal body? The Election Commission of each state should be empowered to regulate local chapters of each party. This would decentralise the parties, strengthen local leaders and reduce controls of the party high command.

Second, the parties themselves should select candidates via primary elections. The first party to do this would see tremendous gains in popularity.

But more importantly, this practice would reduce infighting, produce winning candidates, and give us visionary leaders for tomorrow’s India.

And third, the true voting powers of our MPs and MLAs must be restored. Anti-defection provisions, which threaten disqualification for voting against party lines, are an affront to India’s democracy.

As Noorani ji said, “India’s parliamentary system will not come to life unless its party system is democratised.”