Nehru was the real architect of India’s Constitution. Ambedkar’s role came much later when all decisions were already made.  Ambedkar’s Drafting Committee was asked merely to “dress the baby,” in the words of one its members. All major principles of India’s Constitution were decided by the Experts Committee of the Congress Party and the two top committees of the Constituent Assembly, all headed by Nehru.

In the following article, Sudheendra Kulkarni, an aide to former PM Vajpayee, explains why neither Nehru’s foes nor followers wish to highlight Nehru’s role in the making of India’s Constitution.

We are living in times when it has become hazardous to extol the greatness of our first prime minister who provided leadership to a free India for the longest stint in its history ─ 17 years. Pandit Jawaharlal Nehru began steering the ship of the nation in tempestuous times, when India had been partitioned and the division was accompanied by communal killings, destruction, and trans-border migration on a horrendous scale.

He led the process of building new institutions of democratic governance, a new culture of parliamentary democracy, also a new policy platform for the reconstruction of a poor and backward economy wholly incapable of meeting the aspirations of a newly liberated nation.

He was also the paramount guide to establishing independent India’s relations with the rest of the world on the principles of peace and universal brotherhood, because of which India’s prestige in the comity of nations rose enormously. All this earned him the honorific of ‘Architect of Modern India’.

But call Nehru the ‘Architect of Modern India’, and you will get brickbats from social media trolls who believe history began in May 2014. A systematic effort is underway to erase or at least belittle Nehru’s contribution to the making of independent India.

Only his mistakes are being highlighted. Yes, he committed some big blunders but which great leader in any country hasn’t? However, what stands out incontrovertibly in any objective scrutiny of Nehru’s role in India’s freedom movement and as India’s first premier is that his positive contributions far outshine his missteps.

Nehru’s Role in the Making of the Constitution Ignored

Since this article is being written on the occasion of Constitution Day – 26 November, 1949 was when the Constituent Assembly adopted the Constitution of India; it came into force on 26 January, 1950 – I would like to highlight how Nehru’s pre-eminent role in its making is sought to be falsified. In contrast, a myth has been created that Dr B R Ambedkar was the sole author and architect of the Indian Constitution.

A successful attempt has been made to raise, in popular consciousness, Ambedkar’s place in Indian history far above that of Nehru.

Nehru’s decisive philosophical contribution to the Constitution seems to be headed towards oblivion.

All political parties have played a role in this re-writing of history, mainly driven by electoral considerations. One can understand the intentions of Nehru’s ideological and political opponents in doing this.

Disconcertingly, even the Congress party and the large body of its supporters among the intelligentsia have followed the bandwagon.

It is not my intention to negate or belittle Dr Ambedkar’s important role in drafting the Indian Constitution – or in India’s freedom struggle. As a champion of social justice and a determined fighter for the just rights of the oppressed and discriminated sections in the caste-ridden Indian (Hindu) society, he imparted a uniquely useful dimension to our freedom struggle and also to the Constitution.

Indeed, as the head of the Drafting Committee of the Constitution, he certainly stands tall among the luminaries who were part of the Constituent Assembly.

Ambedkar: Not the Sole Architect of the Constitution

However, it helps to know that members of the Drafting Committee – much less its chairman – did not have the sole or overriding power to prepare the document on their own, or the way they like. They had to draft the Constitution as per the views and recommendations of various subject committees, and the draft itself was discussed, amended and ultimately adopted by the larger Constituent Assembly. 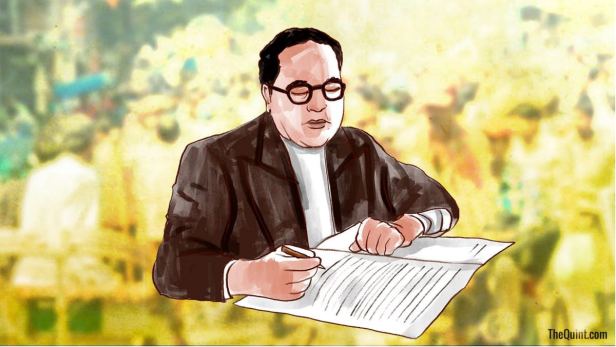 The Constituent Assembly met for the first time on 9 December 1946. Ambedkar became the law minister after 15 August 1947.

In this entire process, no leader played a more pivotal role than Nehru. How could it have been otherwise? He was, after all, and after Mahatma Gandhi, the tallest leader of the freedom movement and the Congress. He was the prime minister in the interim government of India, formed on 2 September 1946.

The Constituent Assembly met for the first time a month later, on 9 December. Ambedkar was not a minister in this government. He became a minister with the law portfolio after India won independence on 15 August 1947.

It was Mahatma Gandhi who asked Nehru, the Prime Minister of the new Congress-led government, to invite Ambedkar to join the council of ministers.

Again, it was on account of Mahatma’s suggestion, and also in recognition of Ambedkar’s well-known scholarship in legal and constitutional matters, that the Congress party, which had an overwhelming majority in the Constituent Assembly, decided to appoint him as Chairman of the Drafting Committee.

Ambedkar was not a member of the Congress. Indeed, he was its bitter critic. He was not one of the front-ranking leaders in the anti-British struggle, which was led, principally, by the Congress. Therefore, it is unreasonable to think that, when the time came to create a Constitution for the soon-to-be-independent India, the Congress and its leaders would play a role subservient to that of Ambedkar.

It should also be remembered that by the time Ambedkar was appointed Chairman of the Constitution Drafting Committee (on 29 August 1947), the Constituent Assembly had already begun its work with Nehru providing the guiding philosophical leadership.

All of us today know that the Preamble to the Indian Constitution is its heart and soul. As stated by Ambedkar’s own Drafting Committee, the Preamble is based on the ‘Resolution on the Aims and Objects of the Constitution’ (which came to be known as the ‘Objective Resolution’), which Nehru moved on 13 December 1946, and it was adopted by the Constituent Assembly on 22 January 1947.

Nehru Credited With the ‘Basic Structure’ of Constitution

The Supreme Court of India, in its landmark 1973 judgment in the Kesavananda Bharati case, held that the objectives enshrined in the Preamble contain the Basic Structure of the Constitution.

The Preamble of our Constitution is of extreme importance and the Constitution should be read and interpreted in light of the grand and noble vision expressed in the Preamble.

In other words, the ‘Basic Structure Doctrine’, which has given our Constitution its permanent, stable and guiding character, owes mostly to Nehru’s vision as he had articulated it in the Constituent Assembly, much before Ambedkar was made the chairman of the Constitution Drafting Committee.

‘Objective Resolution’ That Forms the Basis of Constitution

Besides the Preamble, Nehru’s intellectual fingerprints can be seen all over the Constitution. Most of the defining ideals, principles and guarantees in the Constitution, for which it is globally acclaimed, had found passionate expression in Nehru’s speech while introducing the ‘Objective Resolution’.

These include: people as the source of all power and authority of the independent and sovereign India; guarantees of social, economic and political justice to the people of India without any discrimination; equality before the law; freedom of thought, expression, faith; safeguards to backward and tribal areas, and historically discriminated sections of society; and an obligation on the government to promote world peace, international friendship and cooperation.

Furthermore, Nehru was chairman of two important committees ─ Union Powers Committee and Union Constitution Committee. The deliberations of these committees helped in ensuring the centrality of the Union government over State governments, a principle that has greatly protected the political unity of India and kept a check on fissiparous forces.

Nehru, a quintessential democrat, recognised the importance of safeguarding citizens’ right to freedom, which came to be embodied in Article 19 and also in Articles 20-22.

Nehru’s Constitutional wisdom on the powers of president has been respected by all the Presidents – from Rajendra Prasad to Ramnath Kovind.

He upheld the principle of an independent judiciary as the protector of citizens’ rights and also to check the transgressions of the State institutions. Guaranteeing protection to minorities (on which Nehru and Ambedkar had similar views) was his other important contribution.

On the rights of the President, Nehru ensured a fine working relationship between the Head of State and Head of Government, even as the Constitution makes it amply clear that Parliament is the supreme law-making authority and the Prime Minister is the supreme executive authority.

This constitutional wisdom has been respected by all the presidents ─ from Rajendra Prasad to Ramnath Kovind ─ and has given all the prime ministers ─ from Nehru to Narendra Modi ─ the necessary space and powers to translate people’s mandate into governance.

Nowhere is it more evident than in the all-important ‘Objective Resolution’ speech. He, indeed, spoke twice on this resolution. Even by the Nehruvian standards of brilliant oration, the two speeches excel in idealism enriched by lyricism. They are comparable to his ‘Tryst With Destiny’ oration, on the midnight of freedom, eight months later.

Nehru reminded his audience that the most important leader of the freedom movement, Mahatma Gandhi, was absent in the Constituent Assembly, since he was not its member. More a saint than a political leader, the Mahatma was busy dousing the flames of communal hatred and violence in different parts of the country.

The Father of our Nation has been the architect of this assembly and all that has gone before it, possibly of much that will follow. Although he is absent, his spirit hovers over this place and blesses our undertaking.

Mahatma was credited as the architect of the Constituent Assembly by Nehru during one of his speeches.

We should note here that Mahatma Gandhi, and not Ambedkar, is being credited with being “the architect of the Constituent Assembly”. This is not surprising, since Gandhiji provided overarching moral and practical leadership to India’s freedom movement, whereas Ambedkar was the champion of a partial (albeit highly important) message of this movement.

Then, using an expression that belongs more to the language of mystics than of rationalists (Nehru, contrary to popular perception, was a deeply spiritual person), he added:

The eyes of our entire past – the 5,000 years of India’s history – are upon us. Our past is witness to what we are doing here and though the future is still unborn, the future too somehow looks at us.

Nehru reminded the Constituent Assembly that as India stood at the end of an era and embarked upon a new age, “our forebears and future generations are watching this undertaking of Constitution-making and possibly blessing it, if we moved right.”

The expression “Eyes of the past” and “Eyes of the future” contains a powerful message to both the politicians and people of today’s India. As we observe another ‘Constitution Day’, do we all feel, as Nehru felt at the time of Constitution-making, that the generations before us and the generations after us are watching our actions today? Are we aware of our responsibility as “trustees of the future” and as “inheritors of a great past”?

(The writer, who was an aide to India’s former Prime Minister Atal Bihari Vajpayee, is chairman of the Observer Research Foundation, Mumbai. He can be reached @SudheenKulkarni)